So you’re here because you already know your man has a side chick (or two).

You’re still with him despite the fact that he’s cheating, but you can’t let him go.

It might be a phase, or he might be phasing you out so if you’re concerned about your man falling for his extra piece, here’s a list of 17 alarming signs you need to be aware of.

1) He prioritizes spending time with her.

So, your man can’t give you so much as a few hours of his time but you know for a fact that he’s spending time with his sidekick and not at work like you think he is!

This is a major red flag that he’s falling deeper in love with her.

If he prioritizes spending his time with her despite him having a busy schedule, know that things might be more serious than they appear to be.

You don’t have to be a mind reader to see that he’s clearly spending time with her and not with you.

2) He talks a good game but never follows through.

He makes plans but always seems to cancel at the last minute!

Well, chances are his side chick is also free at this time and he’s canceling or bailing on you to spend time with her.

If he’s being this brazen about canceling your plans it’s a clear-cut sign that he’s falling in love with his side chick.

3) He never tries to make plans with you.

You’re the one who has to constantly initiate plans with him because if he’s not available, chances are he’ll be busy at home or out with his side chick.

If he’s avoiding making plans with you, it’s a sign that he might be falling in love with her.

4) He keeps texting her and not you.

There are times when your man will text you more than his side chick but if this is happening too often, it’s a clear sign that your man is falling deeper in love with her and not you!

If there are days when his side chick is the one who gets more texts from him, it’s a clear sign that he loves her.

Ok, so you’ve just gone rogue and have done a full recce on his mobile phone.

He’s telling her how miserable you were last night, or that he’s finding it difficult dealing with you and she’s responding with advice.

It’s enough to make you want to smash that mobile phone. The audacity!

Sadly though, if he’s going as far as to seek her advice about your relationship, it shows that he’s opening up and bonding with her on a far deeper level than expected and is a sign that he’s catching serious feelings for his side chick.

6) He’s spending money on her.

It’s not uncommon for a man to spend some cash on his side chick.

I know, it makes me livid too, but, if he’s dropping enormous amounts of cash on this girl, it’s a very ominous sign that he’s falling in love with her.

So, if you’ve just stumbled across a receipt in his pocket from Louis Vuitton and you didn’t get a gift, guess who’s got a new designer dud.

7) He’s not covering up his tracks anymore. 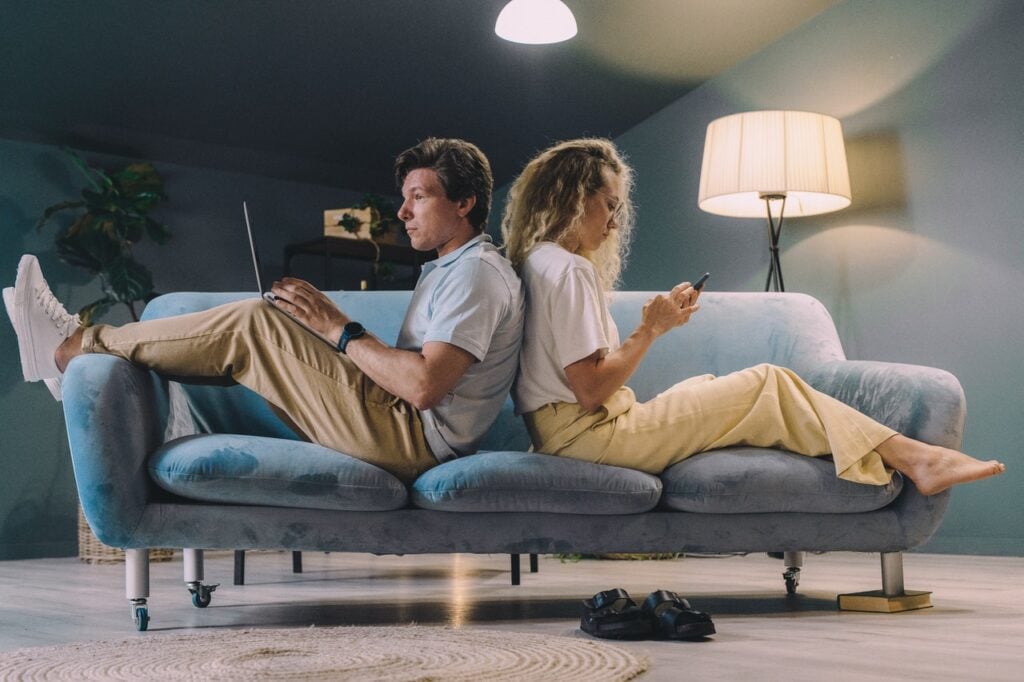 So, before you found him out, things were all cloak and dagger, smoke and mirrors.

Nowadays it seems like he’s really not bothered if you know or not.

This is a stark warning that he’s more into her and he’s less into you.

This is for my married ladies. Have you noticed that there is a certain item of jewelry missing from your man’s hand?

Did he “misplace it” after washing his hands at work?

Sorry to say, if this is becoming the norm rather than the exception, it’s a sign that he’s losing his feelings for you and becoming more loved up with his side boo.

Essentially the message he’s sending is that he doesn’t want to be married to you.

If this is you, girlfriend…don’t go crying over spilled milk. In fact, get a divorce and milk it for all you can.

Previously, his beauty standards consisted of showering once every other day and, wearing a pair of underwear that didn’t have holes in it was considered evening attire.

But, something weird is going on.

He’s working out so much you’d swear he’s about to enlist in the military, he’s starting to use skincare products and his clothing expenses have increased dramatically.

If he’s not having a midlife crisis, you can bet your bottom dollar he’s going hard on the manscaping to impress his side chick.

He’s trying to look his best for her. He’s becoming more serious about her and clearly values what she thinks about his appearance.

If this is you. Ditch him.

Shame, such a hardworking man, pulling all those extra shifts…

If you know your man is cheating with a side chick then I can guarantee you that’s not working late, nor putting in extra effort at the office.

His extra effort is being put into his side chick and therefore, it’s a concerning sign because he’s lying to get more hours in with her.

This is one of the most obvious signs that he’s cheating.

All men are emotional creatures, but when your man stops being affectionate with you it’s a sure sign that he’s not in love with you and has moved on to someone else.

If this is you, don’t feel bad. You deserve better. He doesn’t want to be with someone who doesn’t love him enough.

If he’s not interested in sex with you, it’s because he’s getting it from her.

They’re reaching a new level of intimacy in their relationship which means replacing you as the woman who satisfies him with her.

If this is you, don’t feel bad girl!

Why would anyone want to be intimate with two people with all the STDs in today’s age? Gross.

Kick that loser to the curb and find a man that can really rock your world.

After all, all that faking gets a bit much after a while.

13) He talks about breaking up or, divorce.

He’s bringing up the topic to gauge your reaction.

Sadly, he’s already made his decision but is now trying to familiarize you with the idea by bringing it up.

If you’re married to him and he wants a divorce, it’s not an easy road.

You might have children and have built a life together but can you really be involved with someone who thinks so little of you or who shows you such disrespect?!

Once a cheater, always a cheater and it’s a big red flag that’s falling for his side chick if he wants to get divorced.

If he wants out, give it to him.

14) He picks arguments with you. 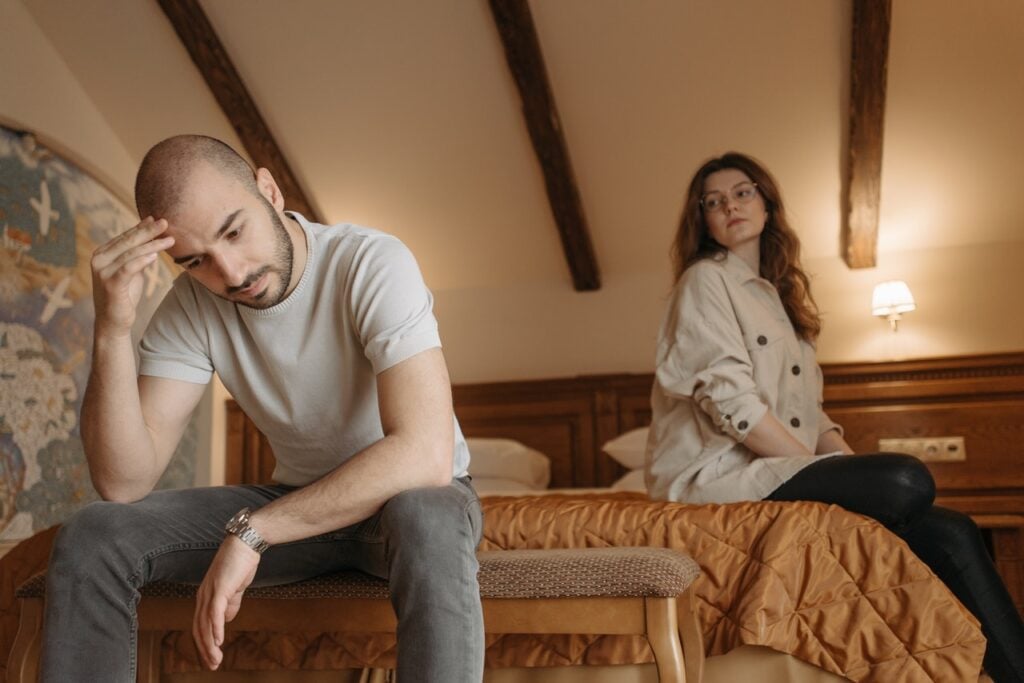 If you’ve noticed that he’s always pushing your buttons and is inciting arguments, this is a typical textbook “I’m falling in love with my sidekick” maneuver.

So why pick a fight?

Well, if you argue about something there’s a good chance that you’ll “give him a reason” to leave.

He’s probably feeling guilty and needs you to do something to quell his conscience.

If your man is looking to fight with you, it’s a sign that he wants you to kick him out so that he doesn’t have to make an excuse to see his side chick.

If he’s been doing this more regularly, it’s an unfortunate sign that he’s falling in love with his side chick.

You’re better off without his two-timing ass.

15) You feel invisible around him.

Does he make you feel like you don’t exist?

He doesn’t call, text, or even speak to you when you’re in person.

Yet, you know for a fact that he’s been messaging her again.

He’s “phasing you out” of his life by treating you like you don’t exist because to him, it’s easier than just simply telling you.

If you can relate, unfortunately, it’s just another sign that he’s falling deeper in love with his side-hustle.

You come into the room and he closes his laptop…BOOM!

Or, you’re coming up behind him and notice he’s happily scrolling through social media all the time where previously, he didn’t even know how to post a picture on Insta.

If he’s suddenly a social media guru, chances are he’s using it to correspond with “her”.

Also, if he was previously ok with letting you have his password and he is suddenly overly privacy-conscious, it’s a sign that he’s busy with things he shouldn’t be… aka.. speaking to his sidekick and falling deeper in love with her with each post he likes.

17) His likes and dislikes completely change.

He used to love listening to Phil Collins with you but has suddenly taken a keen interest in hard-trance and is binge-watching anime on Netflix.

You’re thinking, who the hell is this person?!

You’ll likely find that his taste in things is changing to be more palatable to his side chick.

How do I make my man leave his side chick?

Are you 100% sure that you want him in your life, even if he’s got a side chick?

I’m not here to judge you.

You might have your reasons for wanting to fight for him and that’s not my business.

If this is the case, you’re going to have to do something dramatic and give him an ultimatum.

According to renowned author and couples counselor Peggy Vaugh: 75 % of cheating couples can weather the storm and end up staying together.

Or, my personal favorite, beat him at his own game. He’s got a side chick, tit-for-tat, you get a side cock (this is the male version of a side chick by the way!)

You might find that his attitude changes 100% when he realizes that you too can play the game.

However, if you’re not about that life, the best thing to do would be to dump him. Dump him and never look back.

You deserve a committed, loyal, and dedicated partner who only has eyes for you.

So, after reading these signs I hope I’ve given you some food for thought.

Regardless of your circumstances, take the time to apply your mind and consider how you’re going to choose to continue.

If you stay and he leaves her, good for you. But, do you always want to be left wondering who the next side-chick is going to be.

If you leave, well done. You’re showing him exactly what he can do with himself. I’m proud of you! 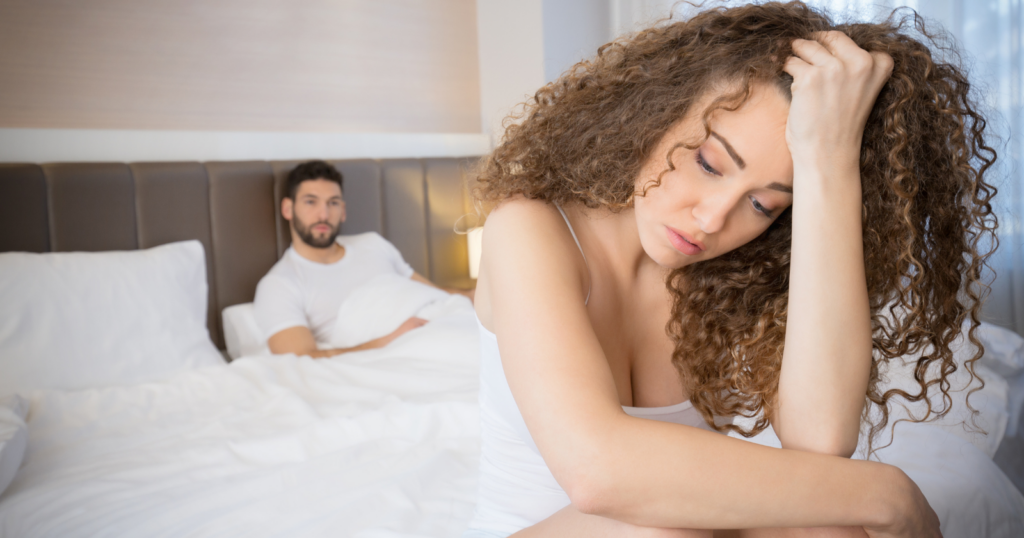 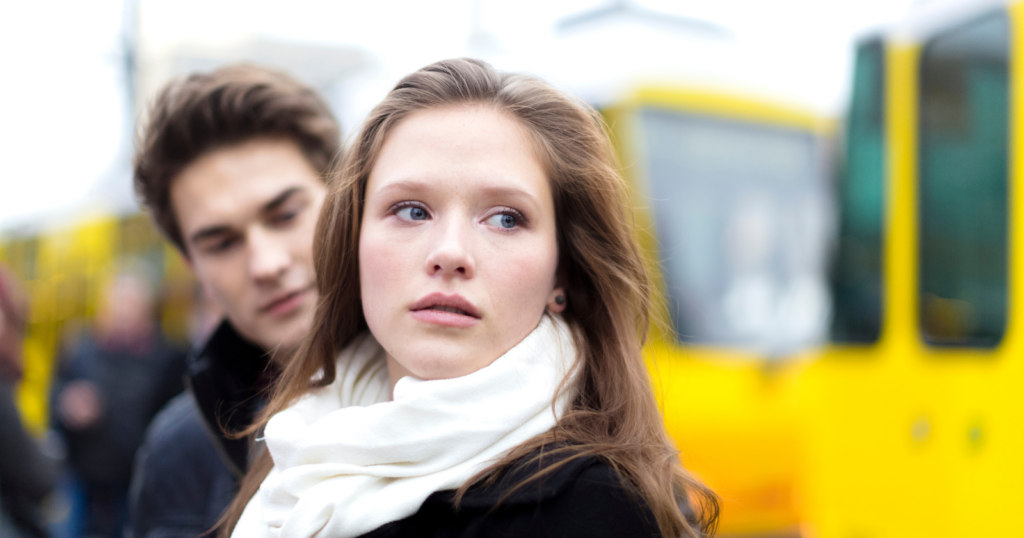