Can you really tell if a guy likes you based on his reaction to your jokes?

Making him laugh could be a sign of attraction. But, at the same time, his laughter could indicate that he’s nervous around you or that he’s unconsciously mirroring your behavior.

So, how can you tell the difference?

The secret to getting an accurate read of his feelings is to look for nonverbal signs of interest based on his body language.

If you make a guy laugh does he like you? Yes, if he also does this:

1) He makes prolonged eye contact with you while laughing

According to Body Language Central, when two people are having an interaction that is on the entertaining or humorous side, it is not uncommon to see prolonged eye contact with the person they are interacting with while they are laughing.

It is a very visible marker of the person’s interest in you and can be interpreted as another form of flirting.

So, if you make him laugh and he keeps looking at you while doing so, you’ve got a green light to move the conversation forward.

Or, if you’re already friends with this guy, then you can try to take things to the next level with him.

2) He typically sits or stands close to you

“If he does laugh a lot around you because he’s attracted to you then it would be likely that he would show other signs of attraction in his body language,” says BLC.

In other words, if you make him laugh and he also likes you, he’ll most likely sit or stand close to you, and show other similar signs as well.

Because physical proximity is a very intimate and nonverbal way of expressing interest in a person. It’s natural to want to be close to someone we like.

So, if you’re seeking a clear signal of his interest in you, look for it in similar aspects of his body language, such as leaning towards you while talking to you.

3) He tends to touch you frequently 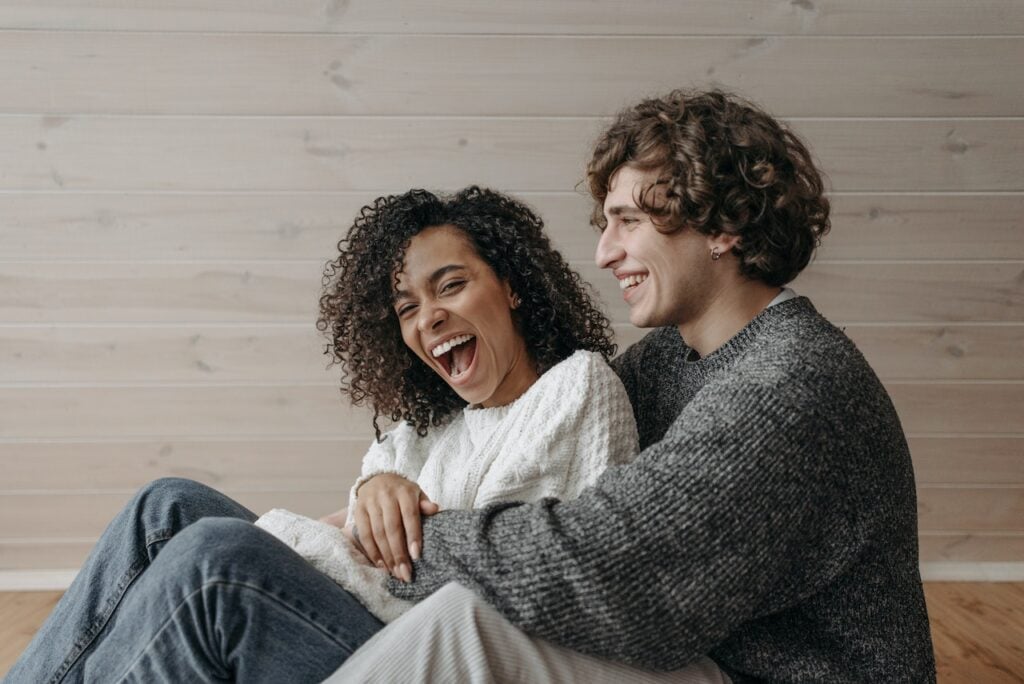 “Guys who are confident and don’t have hang-ups about touching females will touch you in many ways if they like you. After all, they like you and they get a thrill when they touch you,” says Lachlan Brown, author and founder of Hack Spirit.

This means that there are chances that a guy who likes you to also touch you when you make him laugh.

If he touches you when you make him laugh, this may mean that he is attracted to you. He is seeking physical contact to connect with you.

But remember: The more you indicate interest in him, the more likely it is that he’ll reciprocate the feeling.

4) His feet are always pointing in your direction

In a study published by the Journal of Nonverbal Behavior, called Strangers meet: Laughter and nonverbal signs of interest in opposite-sex encounters, it’s suggested that:

“Males seem to communicate interest for the female during laughter with only a few signals, such as body orientation and dominance signals.”

The next one is the direction in which his feet point.

If his feet are typically pointing in your direction while he’s laughing and while he’s around you, this might be another sign of interest in you.

Yet, the research provides a caveat: The guy will be more likely to point his feet in your direction if he likes you and, at the same time, if he isn’t sure of your feelings toward him.

5) His laugh sounds natural, not forced

If you make him laugh and he’s doing so in a natural way, this is another sign that he could like you.

Because a natural laugh is usually a sign of comfort with the situation and conversation. What’s more, a burst of natural laughter indicates that he has no inhibitions and is comfortable in your presence.

So, if he feels at ease around you, he might be into you. It’s that simple!

How many times did you think of a hilarious joke, only to be met with silence from your friends when you said it?

It can be crushing. But, if this guy laughs, it can mean that he likes you.

Because you were the only two people who were laughing! And it probably happened multiple times!

“But if he’s laughing at your jokes when you’re not even that funny, he’s definitely interested in you!”

Or, who knows, you might have similar tastes in humor.

If you make a guy laugh does he like you? No, if he also does this:

When a man blinks more frequently, that’s a sign of nervousness, notes BLC.

To blink more is a very human way of accentuating one’s nervousness. And it’s often done to avoid eye contact or to hide the nervousness.

So, if he blinks more frequently when you make him laugh, this could mean that he is nervous around and uncertain of your feelings for him.

And in turn, it could mean that he doesn’t like you. He is only laughing because he doesn’t know where he stands with you.

2) He starts fidgeting around you

Fidgeting is a normal human reaction to nervousness as well.

What’s more, fidgeting and nervousness are often associated with a lack of interest in a person.

What does this mean?

It means that even if you make a guy laugh, he might not be into you. He might laugh, but give his true feelings away at the same time – with his nervousness.

Why? There could be quite a few reasons – from his nerves to the fact he doesn’t really know you.

3) He rubs his eyes or touches his face a lot 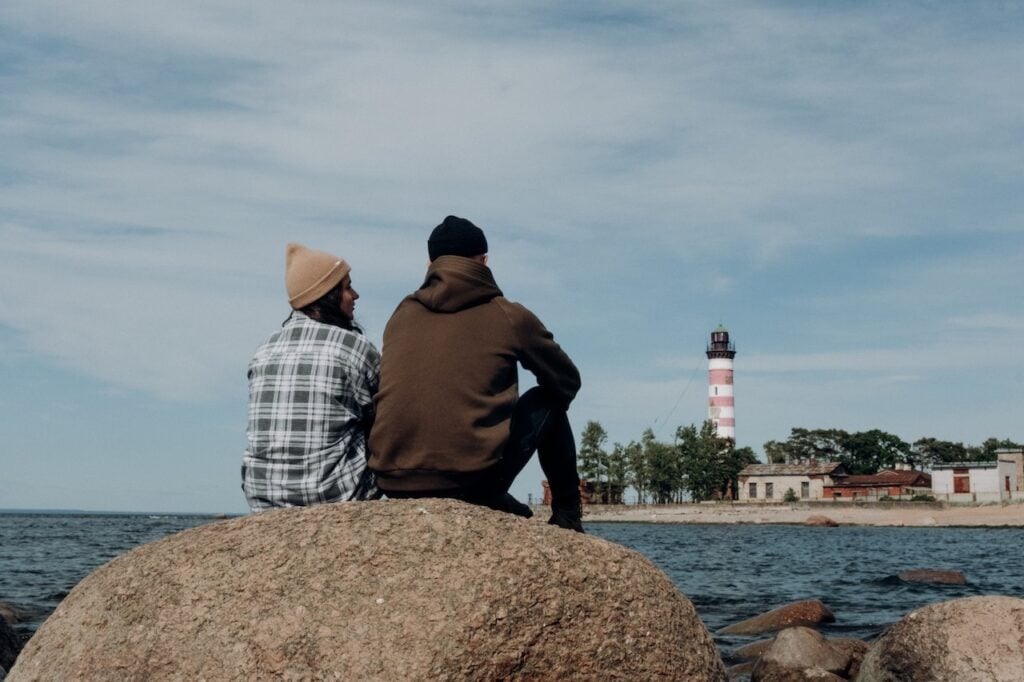 When a guy rubs his eyes, he’s typically trying to hide his nervousness.

Or when he touches his face, he might be doing so as a subconscious way of expressing or hiding his disinterest.

So, ask yourself this: when he laughs, what else does he do?

Chances are, he’s also rubbing his eyes and touching his face or his legs, neck, arms, etc.

“This signals doubt or uncertainty when someone may not agree with something you say. People will typically scratch their necks just under their earlobes,” says Vanessa Van Edwards, Lead Investigator at Science of People.

However, he might be laughing due to peer pressure or because he’s trying to show off.

4) He talks at a higher pitch than usual

When a guy talks at a higher pitch than usual, it may mean that he is expressing his submissiveness towards you.

Well, “if he is submissive around you then it might be because you come across as threatening, that he feels like you have some authority over him, or that you hang out with people that he feels threatened by,” says BLC.

So, even if he laughs a lot at your jokes, if he talks at a higher pitch than usual, it could mean that he is actually hiding his real feelings toward you.

5) He points his feet away from you

In this case, he would likely show distancing behaviors around you, such as pointing his feet away from you and crossing his arms.

These are all signs that he doesn’t like you even if he laughs.

6) He finds everyone funny

If you make a guy laugh, does he like you? Not if he finds everyone equally funny.

If he finds everyone funny, it just means that he is an open-minded guy who doesn’t have a preference for one or the other.

However, you can’t use his reaction to figure out if he likes you or not.

Instead, you need to look at other signs that we’ve covered.

If you make a guy laugh does he like you?

The answer is yes and no, depending on nonverbal signals that the guy might give off.

So, to answer the question more accurately, you need to analyze his body language and use your own judgment to figure out his true feelings.

Pay attention to the way he’s looking at you, what he does with his hands, and how wide his smile is. All of these are signs that he might be into you.

But this takes time and experience. There’s no way around it. It takes practice, so don’t feel bad if you can’t figure out his feelings right away. 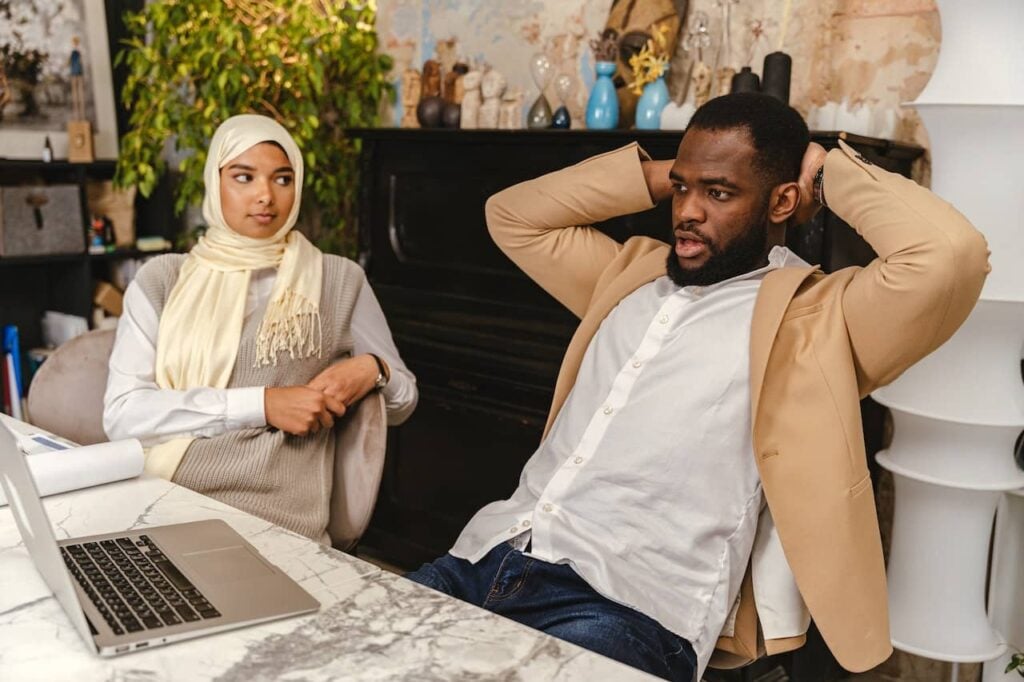